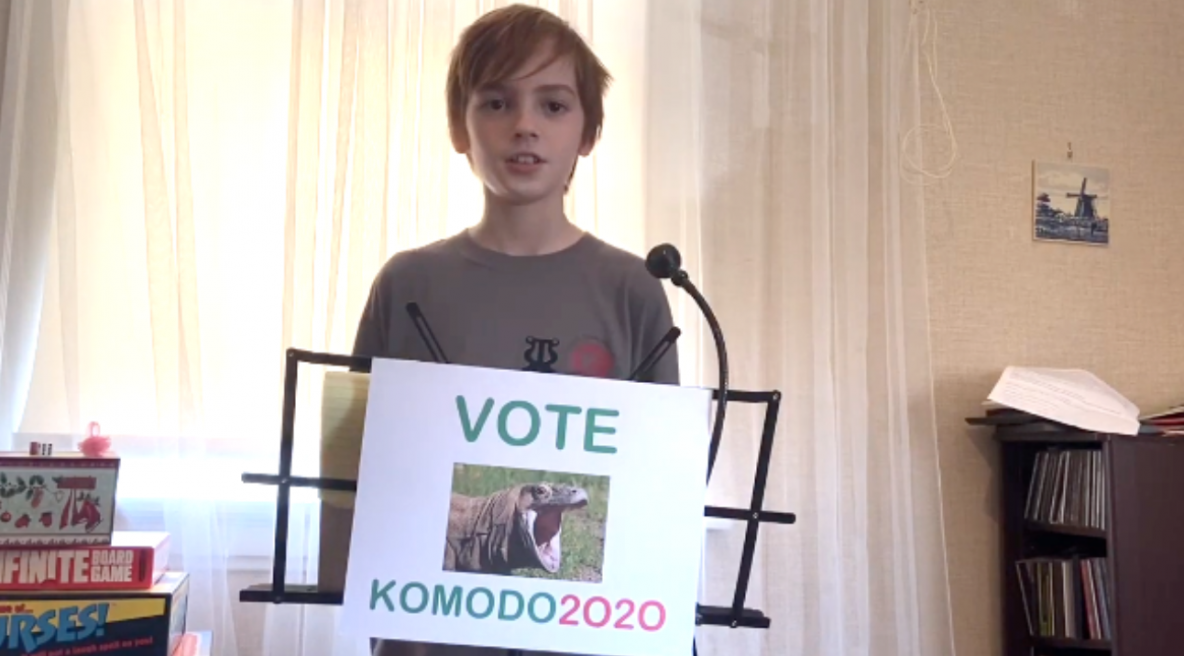 New School Montessori 4th grader, Henry,  enlisted his family in helping him complete his homework assignment which was to “write down some questions for an adult to ask you about an animal of your choosing.”

Henry decided that being peppered with questions from a bunch of adults felt very similar to a press conference, and so his family joined in the fun of creating a mock press conference about the upcoming election for King of the Reptiles between candidates: Komodo Dragon and his opponent Bearded Dragon.

As you watch the videotaped press conference, you will see Henry set the record straight about the recent controversy when Komodo was seen sticking his tongue out at a gathering of turtles. Henry assured reporters that Komodo did not mean to be rude and dismissive, rather he uses his tongue to smell.

The New School Montessori is endorsing KOMODO2020 in the next election and wishes Komodo luck as he continues on his campaign trail through Google Classroom. Don’t forget to cast your vote!

Interested TNSM friends, families and staff are invited to help with fall clean-up 8am until noon. We will be spreading mulch in both the preprimary and elementary woods (50 yrds), cleaning out flowerbeds along the teachers’ parking lot and the Ginkgo House (E.C.). Tools for parents to bring would be: rakes (leaf and garden) snow or grain shovels, pitch forks, tarps, wheel barrows or garden carts etc. Bagels, fruit, coffee etc will be provided. Alumni students and families: Contact the office at 513-281-7999 if you can help, so we’ll have enough snacks for everyone. (Current TNSM parents can sign up to attend ...
Sep
25
Fri
7:00 pm Celebrating 50th Anniversary of ...
Celebrating 50th Anniversary of ...
Sep 25 @ 7:00 pm – 9:00 pm
Please join us in celebrating the 50th anniversary of our school. We will be adding more information as party details firm up.
Sep
26
Sat
5:00 pm Harvest Moon Festival
Harvest Moon Festival
Sep 26 @ 5:00 pm – 8:00 pm