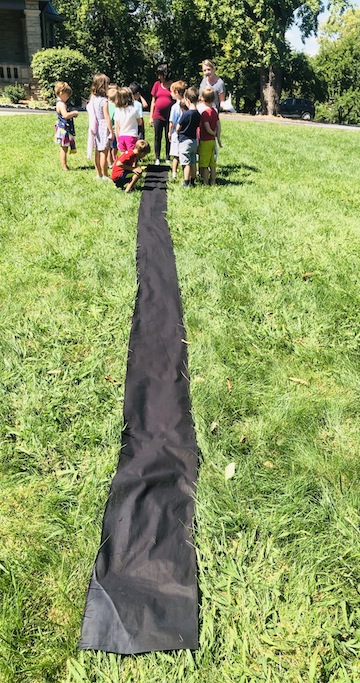 Hello Friends,
There is a Montessori Lesson called the Long Black Strip.  It is often presented at the (6-9) level, and it is considered one of the most powerful impressionistic lessons Dr. Maria Montessori created.  Like many great ideas, it’s simple, and in some astonishing way makes the world feel bigger, smaller, more understood and more mysterious.
Saying that Earth is 4.6 billion years old is like saying the universe is infinite.  The idea or number is too large to appreciate.  Our mind needs an anchor or a way of breaking down something so vast into smaller pieces of information so that we can feel and experience what it means.  Who cares if you can remember that the Earth is 4.6 billion years old, if you never experienced the thrilling swirl of emotion that comes with getting a glimpse of what that means.
Dr. Maria Montessori understood this.  It is why she created the Five Great Lessons (The Coming of the Universe, The Coming of Life, The Coming of Human Beings, Communication and Signs, and The Story of Numbers). The purpose is not to memorize the details, but to feel yourself as a part of something wondrous, dangerous, inviting, and breathtaking. These Great Lessons are the bedrock of the (6-12) Montessori curriculum and are what Montessorians mean when they refer to a “Cosmic Education.”
Dr. Montessori said, “Let us give him a vision of the whole universe.  The universe is an imposing reality and an answer to all questions…All things are a part of the universe, and are connected with each other to form one whole unity.  This idea helps the mind of the child to become focused.”
So back to the Long Black Strip. In the 1940s, Dr. Montessori spent a lot of time in India.  One day, while working with a student, the child shared that he believed he could learn nothing from Dr. Montessori because he was from the oldest civilization in the world.  He believed knowledge was static and most of it was held in India, his home.
As Maria Montessori was walking home, she thought about how to introduce the student to how little we know about the world when contrasted with how long the Earth existed before we arrived.  She saw some men laying long black cables along the street.  Eureka!  She contacted a friend to create a long black piece of fabric, nearly 300 feet long, with a thin white strip at the end.  The next day Dr Montessori met with the student and his peers.  Slowly she unraveled three football lengths of black fabric as the students followed along, asking why are they doing this and if the fabric was entirely black.
“No, it will change to white when the history of humans begin, ” she answered.
As it was reported, Dr Montessori walked mostly in silence, only occasionally sharing a few words.
“Whirling gases. No Life.”
(Long silence. Walk.)
“Volcanoes and rain.”
(Long silence. Walk.)
“Oceans.”
(Long silence. Walk.)
“Plants and Animals.”
Long silence. Walk.
Then, tired and curious, the last of the fabric was unrolled, revealing a thin white piece.
(Gasp. Silence. Stillness.)
“This is humanity – all humans that ever lived.  Hold it in your hands.  This is all of history: cave people, Egyptians, Greeks…all here.”
(Silence.  Questions, questions, questions!)

The Long Black Strip is now 100 feet instead of 300, but the impression is still a powerful one.  Yesterday, our (6-9) teachers took their students outside and told this story again.  There, with the ancient sun (4.6 billion years old) shining down on us, the electric buzz of cicadas (they’ve been around for over 20 million years) ebbing and flowing, the black cloth lying on the green grass (55 million years old) and unrolling past the ginkgo tree (270 million years old), it revealed that thin white strip, held in the palm of our 1st graders’ hands (6 years old).

I watched them as the the world grew and shrank, became more knowable and mysterious.  That thin white stripe in their hands.  We are in their hands as much as they are in ours.

Jan
20
Mon
all-day No School – Martin Luther King J...
No School – Martin Luther King J...
Jan 20 all-day
Jan
21
Tue
6:30 pm Board Meeting @ The New School Montessori
Board Meeting @ The New School Montessori
Jan 21 @ 6:30 pm – 8:30 pm
We have 12 parent board members each year who meet with administrative staff to help guide the business and mission of the school. You are welcome to attend TNSM Board meetings usually held on the 3rd Tuesday of most months.
Jan
26
Sun
2:00 pm Winter Open House
Winter Open House
Jan 26 @ 2:00 pm – 4:00 pm
Please join us for our winter open house. Invite family, neighbors and friends to visit. Teachers, board members and staff are available to answer questions, to give tours and to facilitate the discovery process as children explore the environment.
View Calendar
Add