Angeline Stoll Lillard’s book, Montessori: The Science Behind the Genius, begins with this sentence: “Two fundamental cornerstones of American schooling today were placed at the turn of the 20th Century: the school as a factory and the child as a blank slate.” Modern research shows that both of these ideas are outdated and ineffective when it comes to educating children, and yet, they remain deeply embedded in the educational models of the United States.

The first, the school as a factory, was the result of mass public education spreading across America starting in the mid-19th century while simultaneously the Industrial Revolution was shaping a culture of efficiency. Successful business models were quickly adopted as useful educational models. Again, here is a passage from Lillard’s book that best demonstrates this:

Strangely, our educational system seems stuck in a mid-century model even though our economy has dramatically shifted so that we are driven more by the exchange of ideas and entrepreneurship than the products of a factory.

The second outdated belief still influencing our educational models is the assumption that students are “empty vessels” waiting to be filled up. In spite of the fact that this long-held belief has been debunked by the past 30 years of research in cognitive science, it remains one of the foundational flaws in how schools shape their curriculum and teaching strategies.

Why haven’t these alternatives found a strong foothold in our current traditional educational system?

The good news is there was one educational theorist who went beyond simply theory and developed a broad and detailed curriculum based in the constructivist model.  If you haven’t guessed already, that person was Dr. Maria Montessori. 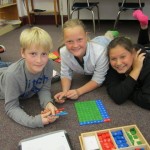 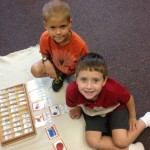 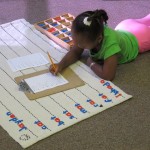 Lillard breaks down eight principles developed by Dr. Montessori that easily illustrate the essence of what a Montessori education looks like. Here they are in Lillard’s words:

These eight principles, as simple and intuitive as they may seem, are largely still ignored in most American schools today. But each year the Montessori movement grows, and each year we take another step toward pulling our educational system out of the past and launching it into the future.