Melissa Robinson began teaching at TNSM in 2011 when she founded the strings program, sharing her instrumental background on violin, viola, cello, and bass. Along the way, lower elementary musicals crept into her teaching role, with the production of a 1st, 2nd, and 3rd grade musical annually. Melissa thoroughly loves the process of starting with just an idea and seeing the project through to a polished performance.

Melissa has taught general music k-8, as well as instrumental music k-12. Former director of the Strings Division at Northern Kentucky University, she directed many ensembles and served as a teacher trainer for many years. She also performed with School House Symphony, touring regional elementary schools and presenting educational concerts. She has performed as a member of the Marion Philharmonic, the Muncie Symphony, and the Anderson (IN) Symphony. Melissa received her B.M. in music performance from Ball State University, as well as a B.S. in music education. 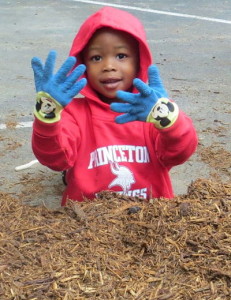 Interested TNSM friends, families and staff are invited to help with fall clean-up 8am until noon. We will be spreading mulch in both the preprimary and elementary woods (50 yrds), cleaning out flowerbeds along the teachers’ parking lot and the Ginkgo House (E.C.). Tools for parents to bring would be: rakes (leaf and garden) snow or grain shovels, pitch forks, tarps, wheel barrows or garden carts etc. Bagels, fruit, coffee etc will be provided. Alumni students and families: Contact the office at 513-281-7999 if you can help, so we’ll have enough snacks for everyone. (Current TNSM parents can sign up to attend ...
Sep
25
Fri
7:00 pm Celebrating 50th Anniversary of ...
Celebrating 50th Anniversary of ...
Sep 25 @ 7:00 pm – 9:00 pm
Please join us in celebrating the 50th anniversary of our school. We will be adding more information as party details firm up.
Sep
26
Sat
5:00 pm Harvest Moon Festival
Harvest Moon Festival
Sep 26 @ 5:00 pm – 8:00 pm